It is considering a joint investment worth €12 million with the aim of increasing productivity, completing its international development and raising knowledge levels of its staff

The Aurrenak cooperative has committed itself to increasing the efficiency of its head office in Alava within the new strategic plan that it has designed for 2020, as well as completing and enhancing the joint commercial network that it shares with the Loramendi company abroad. Operations that will entail an overall investment of €12 million.

Over the next four years the Aurrenak cooperative, part of the Mondragón Corporation and specialising in the design and manufacture of moulds and tooling for casting, will work to increase the efficiency of its head office in Vitoria, as well as completing its international development and improving knowledge among its staff, according to its new 2020 strategic plan. Three objectives to be achieved and for which it plans to make a joint investment of €12 million in its production plant in Alava and in its factory in Mexico, specialising in maintenance work and final assembly.

Aurrenak’s ultimate challenge is to continue growing until it achieves a consolidated turnover of €50 million in 2024, which is when the cooperative will be celebrating half a century in business.

As explained by management, the main challenge to be addressed at an internal level is to increase efficiency at its Vitoria plant, where 100% of its tooling is manufactured. Specifically, the expected outlay will be aimed at acquiring equipment to update its productive capacity, in addition to establishing the organizational development of the company with a review and optimization of its key processes, given that in the near future it will be expanding its production space after having acquired a plot of land adjacent to its 4,000 square meter plant. And another of the operations to be carried out over the next four years will be geared towards developing its capacity to manufacture moulds that are larger than the current ones, both in Vitoria and Mexico, where studies will also be made into relocating the activity in a new plant with structure and cranes capable of handling up to 50 Tn.

On the international stage, Aurrenak will complete and strengthen the commercial network that it shares with the Loramendi company.

In North America, it will consolidate its presence in the United States, where it has an office in Fenton (Michigan), and look into the possibility of providing maintenance and repair services from the United States itself or, otherwise, from the Mexican plant in Saltillo.

With regards to China, it will strengthen its existing dedicated technical and commercial team with the intention of increasing its share of the local market and that of the Asia region, where it has begun to work with certain customers in South Korea and Japan.

The last line of action defined in the strategic plan will be based on increasing technical knowledge with activities in training, mentoring and professional development. In doing so it will be able to respond to the change of technology that is taking place with the move over to electric powered vehicles which, considering that a high percentage of its product is currently linked to parts connected with the combustion engine, will affect it quite significantly. For this reason, Aurrenak considers it necessary to adapt to other types of product, which means starting off by preparing people to be more flexible. 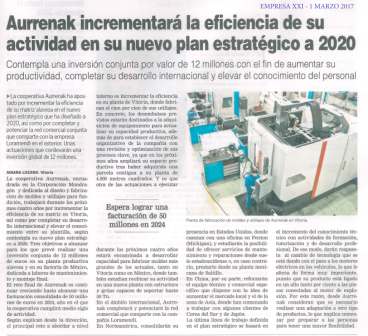